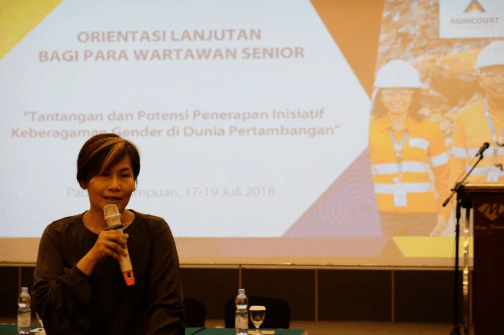 Batangtoru, July 24, 2018 – PT Agincourt Resources, operator of Martabe Gold Mine holds 2018 Journalistic Competition. The theme of the competition this year is “Challenges, Potential, and Opportunities in Implementation of Gender Diversity Initiative in the Mining Industry”. This competition was launched in Padangsidimpuan in the middle of of the Senior Journalist Media Visit and Media Capacity Building 2018.

“We selected that theme for this year because gender diversity is a subject not yet sufficiently covered by the mass media in Indonesia, especially in North Sumatra. Moreover, its implementation in the mining world that has been dominated by males, will be a very good example to be exposed as a journalistic work. At Martabe Gold Mine, we believe that diversity will strengthen the unity and finally will turn the company performance better,” Katarina explained.

Furthermore, Katarina said the gender diversity theme in the 2018 Martabe Gold Mine Journalistic Competition was also expected to be the medium for the society to see and perform objective assessment on the contribution of female employee existence in the mining industry.

Katarina explained in details that the journalists who could join the competition are Indonesian journalists who work for print media (print, online, and electronics) with coverage area of North Sumatra. The mass media are the ones that have legal status and have been registered at the Ministry of Law and Human Rights.

Eligible journalistic works must be original, which authenticity can be proved, are not edited, not translated, not summarized, do not contain ethnic, religion, race, inter-group issues, do not qualify as commercial advertisement or advertorial, and which have never been proposed in other journalistic competitions.

“The scripts that can be submitted for the competition are feature news and in depth reporting that have met the Journalistic Ethics. Journalists who are interested can send a maximum of three journalistic works. The journalistic works must have been publicized in the respective mass media, not the internal and personal media, in the period of July 17 to August 17, 2018. Announcement of winners will be made in the beginning of September 2018,” Katarina added.

Members of jury for the competition is the LKBN Antara Senior Editor who is also the writer of the book ““Mulia Sebagai Perempuan, Kisah Kehidupan yang Menginspirasi (Being Noble as A Woman, an Inspiring Life Story)” Maria D. Andriana, Harian Analisa Daily City Editor Rizal Rudi Surya, and Katarina Siburian Hardono. “We invite all journalists who work in North Sumatra to join this competition,” said Katarina.