PT Agincourt Resources is determined to run a sustainable mining business, be responsible to nature and provide benefits to the community around the Martabe gold mine. As the third largest gold miner in Indonesia, PT Agincourt Resources (PTAR) recognizes the importance of the principle of sustainability. The company is making real efforts to conserve and protect biodiversity by setting aside $28.3 million to support a program to protect nature and ecosystems in Batangtoru area, North Sumatra.

“We have an ongoing program to optimize assets and costs, by increasing efficiency and productivity, reducing costs and increasing cash flow. Therefore, we have a realistic target of becoming a first-quarter cost producer producing more than 350,000 ounces of gold per year,” said Muliady Sutio, President Director of PT Agincourt Resources. With efficiency in all fields, PTAR can minimize land clearing and become an environmentally friendly mine.

PTAR’s determination to manage an environmentally friendly mine is not just lip service. Despite costs and training, PTAR chose to use more advanced technology to extract gold ore with cyanide. Cyanide and mercury are equally harmful to humans and the environment in excess levels, but in the open, cyanide decomposes more easily than mercury.

Cyanide is often found and is familiar in various industrial or mining residues. It also occurs in nature as free cyanide and is more commonly found to form metal cyanide complexes. It is very stable underground or in the absence of light and decomposes rapidly in surface water or soil exposed to sunlight and decomposes as harmless free cyanide. Several types of plants such as Urtica dioica (nettle) and Sinapis arvensis (a type of wild mustard) are able to degrade cyanide because cyanide is a natural component of this plant.

The refining method using cyanide (cyanidation) is claimed to be safer because it does not produce tailings and does not produce processed residue in the form of solid materials that can pollute rivers and harm the surrounding community. The gold extraction process using mercury only reaches 40% while cyanide can reach 91%. Thus the gold produced becomes more. This method is carried out by spraying cyanide compounds continuously on mineral ores with gold content that has been placed in a special area. The mineral ore (ore) has previously been refined. The gold content in the rock will dissolve with the cyanide liquid, which is then accommodated in a holding pond. The gold solution is then pumped to the processing plant for the refinery.

In addition to technology to extract environmentally friendly gold, PTAR also implements strict procedures for processed residues. PTAR has a large holding pond and processing facilities that make all mine waste products neutral or environmentally friendly. Before discharging the treated water into the river, PT Agincourt Resources applies very strict procedures. Large quantities of water that have not reached environmental safety standards are accommodated in large dams, then gradually flow into the treatment facility when it rains. Water that has gone through a detoxification process and has met the threshold standards tested in the laboratory is then discharged into the river in the presence of interested parties. Water from nature is returned to nature at levels that meet the water quality standards of Batang Toru river.

“All the processed residues we collect in the dam that we made to store it. If there is excessive water discharge during the rainy season, we channel the water to our water polishing facility before discharging it into Batangtoru River. Before we discharge the water, we test it transparently in an independent laboratory in Jakarta. We opened the laboratory results in front of community representatives and local officials. The management of our processed mining residue is under the direct supervision of the South Tapanuli Regent,” said Wira.

“From the processing facility, we drain water that meets quality standards into Batangtoru River, while we leave the residue in the storage dam. So, we make sure that the material in the form of solid or liquid objects that come out of the mining area is not harmful to the environment and has met the quality standards of the Ministry of Environment and Forestry,” he added. This claim is corroborated by research conducted by the Center for the Environment and Population, Research Institute of the University of North Sumatra (USU) proving that the residual water from Martabe Gold Mine managed by PTAR does not affec on the quality of aquatic biota in Batangtoru River. Meanwhile, routine monitoring carried out by PTAR Environment Department and Martabe Gold Mine Integrated Water Quality Monitoring Team consistently shows that the treated water meets the quality standards set by the government. The results of the research were delivered by the Head of the Center for Environment and Population, USU Research Institute, as well as Professor of the USU Department of Biology, Prof. Dr. Ing. Ternala Alexander Barus, delivered in front of journalists during a virtual gathering for the month of Ramadan, Tuesday, 4 May 2021.

“From the results of this study, we found that there was no decrease in length and weight of fish since the first study was conducted, namely October 2012. We found a total of 32 species of fish. We also took samples from this research not only around Batangtoru River, but also the waters around the mining operational areas such as in Aek Pahu Tombak, and Hutamosu. Apart from fish, we also still find another aquatic biota such as plankton and benthos which can be an indicator of good water conditions for aquatic life. All concentrations of heavy metals that we found in fish from all samples are still far below the dangerous standard set by the Ministry of Health,” Ternala explained

Minimizing land clearing is also carried out in the survey and exploration process. Steve McCarthy, Chief Geologist at Agincourt Resources, explained that PTAR operates 13 drilling rigs as part of further exploration activities at Martabe, so the life of the mine can be extended to 2050. “It’s quite interesting to know the history of how long it took, from discovery to the actual gold production. The duration can be influenced by many factors, such as gold price, community, permits, and others,” said McCarthy.

According to McCarthy, drilling operations are supported by helicopters, so there is no need to clear forest areas and minimize environmental impacts. “After the drilling activities are completed, the area is also rehabilitated,” he added.

In addition to drilling, he said, the company is currently also conducting a three-dimensional surface geophysical survey in the area. This aims to identify further drilling targets to extend the life of the Martabe mine even beyond 2050. For this reason, a regional exploration plan has also been prepared. This plan supports efficiency and sustainability in mine management to have a positive impact on nature conservation and biodiversity in Batangtoru area.

Since 2012, Agincourt Resources has planted thousands of trees on an ex-mining area of nearly 12 hectares. The company is currently preparing another 5,000 seedlings for reforestation.

“Local frankincense trees do not produce high quality frankincense, but are the main source of good quality Sumatran frankincense and the backbone of the frankincense commodity in the community. We go to the forest about two or three times a month to look around and also look for seeds. And if we find a new or rare species of flora, we bring it to the nursery facility and we give it extra attention and care,” said Fitri.

“We stabilize the ex-mining land with topsoil as a root medium at the beginning of the reforestation process.
Before planting other types, we planted sengon and monkeypod trees to form the canopy. Some types of plants cannot grow in direct sunlight, they grow better under a tree canopy, such as sengon, because sengon tree fixes nitrogen and fertilizes the surrounding soil,” Fitri explained.

“We also provide seedlings to the local community. So far, we have distributed more than 1,000 seedlings to residents who ask us,” she added.

Bayu Arianto, the Environmental Monitoring Superintendent at Agincourt Resources, explained that reforestation activities have met the set standards and were approved by the Directorate General of Mineral and Coal of the Ministry of Energy and Mineral Resources.

“The reforestation guarantee fund that we allocate is in accordance with the area that we rehabilitate and develop into a forest or garden, like the one behind this nursery area,” said Bayu, pointing to a small forest outside the nursery fence. The company’s efforts do not stop at reforesting ex-mining areas. It also empowers local communities by assisting in agriculture and plantations. This agricultural cooperative under the guidance of Agincourt Resources is one of the largest in North Sumatra.
*** 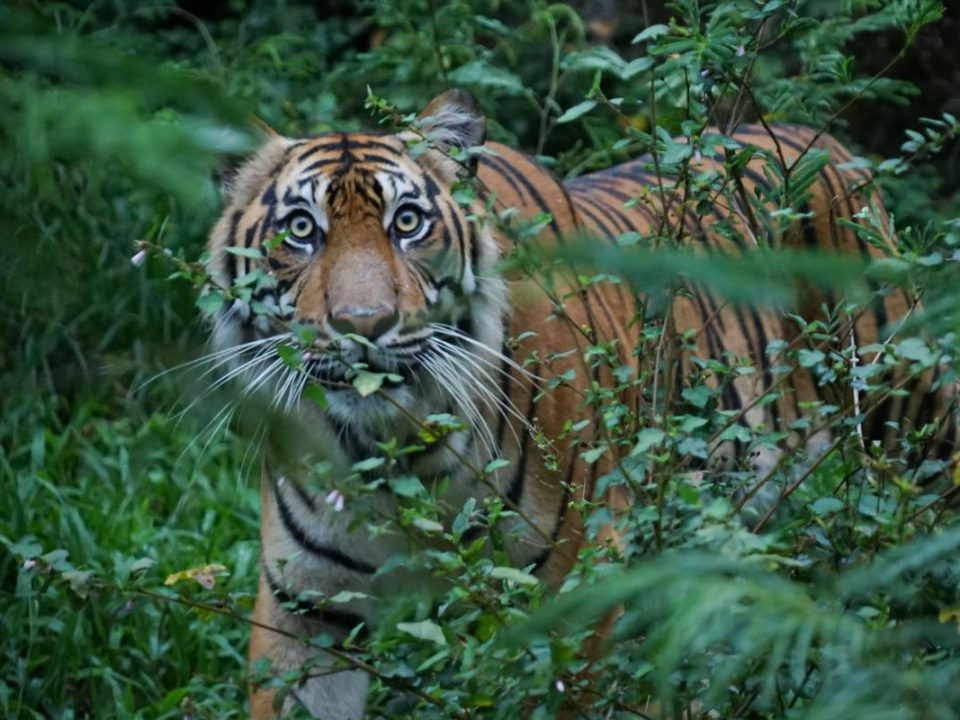 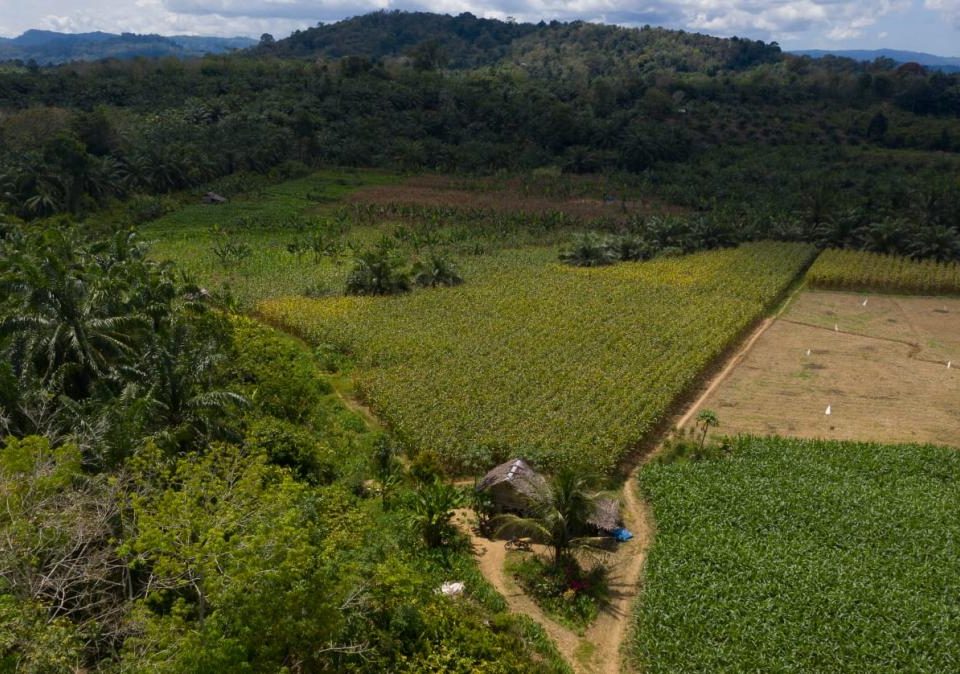