Human life needs air, water, soil and an environment that produces food for human consumption, and all of these elements are highly dependent on biodiversity. What happens when biodiversity is threatened? What are the consequences in the future? Can humans prevent the destruction of biodiversity in the future? Biodiversity is the most complex feature of our planet and it is the most vital. “Without biodiversity, there is no future for humanity,” said Prof David Macdonald, from the University of Oxford.
Biodiversity consists of several levels, starting with genes, then individual species, then communities of creatures and finally entire ecosystems, such as forests or coral reefs, where life interacts with the physical environment. These myriad interactions have made Earth habitable for billions of years. Each species in an ecosystem is interdependent and mutually supportive. One species is lost or its population is disturbed, which will affect changes in an ecosystem.
Let’s take the example of the existence of insects. Seems like a trivial thing, just an insect. So why are insects important? Insects are the basis of many wild food chains that support ecosystems, insects help plants pollinate and reproduce, trees that reproduce well help produce oxygen that humans and other living things need. That is the role of insects that are important for the ecosystem that gives life to humans and other living things.
For many people who live in big cities, wildlife is often something that can only be seen on television. But the reality is that the air we breathe, the water we drink, and the food we consume every day are all ultimately dependent on biodiversity. Some examples are clear: without the presence of plants there would be no oxygen and bees or other insects that are needed by trees to pollinate so that they can produce fruit.
The Batangtoru Forest is an example of an important forest in North Sumatra that holds high biodiversity. The Batangtoru forest stretches across three districts – Central Tapanuli, North Tapanuli and South Tapanuli and at several points is close to residential areas. There are many cases of wild animals from the Batangtoru forest coming or getting lost to residential areas, triggering conflicts between humans and animals, some of these animals are protected animals.
Important for Earth, Important for PT Agincourt Resources
Conflicts between humans and animals that are threatened with extinction greatly affect the balance of the ecosystem. Endangered animals have a role in the ecosystem. The same thing happened in the Batangtoru forest area. Capturing or trapping endangered animals can result in a decline in the animal population. PT Agincourt Resources (PTAR) although it cannot directly handle this matter, has a moral concern and responsibility because basically, PTAR is very dependent on the balance of ecosystems and the preservation of biodiversity in its operational areas. PTAR operates and runs its business in the community. PTAR mine site is located not far from the edge of the community forest. PTAR needs water to manage its mines, and the water’s availability depends on well-maintained forests. Protected forests provide air, water and a balanced ecosystem for many lives, including the communities around Batangtoru and PTAR.
Therefore, the preservation of ecosystems and biodiversity is important and an integral part of PTAR’s business. Through the Environment department, PTAR seeks to support various efforts to preserve nature outside the mining area. PTAR cooperates with various parties such as academicians, environmentalist organizations, the government and the community. PTAR regularly finances and researches water quality and ecosystems in the Batangtoru river. PTAR also supports reforestation by providing tree seedlings to communities. Activities that support the balance of the ecosystem outside the mine consist of three parts: Community empowerment, reforestation and care and release of protected animals.
Community empowerment is important to maintain biodiversity because the increase in the Human Development Index will produce individuals who have skills and can compete in the world of work. Counselling on the importance of nature conservation raises public awareness to protect forests and protected animals. With these skills and knowledge, people no longer go into the forest to make a living and will participate in preserving the forest.

PTAR has supported the construction of various facilities such as micro hydropower plants, art buildings, libraries, health facilities, construction of village roads, construction of schools, training and counselling to increase livestock and farming yields. PTAR also supports the breeding and development of jurung fish, a fish endemic to North Sumatra. The Mulia Bakti Farmers Cooperative, which is a partner of PTAR, is one of the largest farmer cooperatives in North Sumatra. A prosperous community will find it easier to protect the environment and preserve nature.
PTAR’s Attention to Local Flora and Fauna
For the development of flora in the Batangtoru forest area, PTAR has an Environment department that is very concerned about various endemic plant species of Batangtoru. The Environment Department has sown the seeds of 310 local plant species such as kemayau, toba frankincense, torop, sengon, forest rambutan, red meranti and local durian. Within the mining area, 36 hectares of land have been reforested and are home to various types of insects, birds, mammals such as forest goats, long-tailed macaques, various types of frogs, snakes and turtles that were also found at the revegetation site. Evidence of successful reforestation is measured by the presence of various types of animals that will form new ecosystems.
The Environment Department regularly goes into the forest to make observations and if they find seeds of rare plants that are possible to be transferred to the nursery facilities, these seeds will be given special treatment and will be developed so that they reach an encouraging number in the nursery facilities. The successful breeding of rare plant species is an achievement that the Department of Environment is aiming to achieve, although for now the main priority is sowing seeds of pioneer and shade plants that can fix nitrogen and restore soil fertility. Several rare plant species are also known to grow in this area such as the giant flower Amorphophalus baccari, A. gigas, and Rafflesia gadutensis Meijer and also pitcher plants including Nephentes sumatrana, N. eustachya, and N albomarginata. The giant flower Amorphophalus baccari, Rafflesia gadutensis Meijer and some types of pitcher plant cannot or are difficult to breed.
Fauna also plays an important role in the ecosystem such as being a host for seed dispersal, assisting seeding and population control. PTAR pays special attention to cases involving endangered animals. PTAR supports a team from the BBKSDA (Natural Resources Conservation Center) of North Sumatra and a foundation for environmentalists who tirelessly provide education to the community to protect and preserve wild animals. PTAR is actively involved and supports several wildlife rescue, care and release activities.
In April 2020, a team from BBKSDA released a pig-tailed macaque (Macaque Nemestrina) in the forest near Bandar Baru village, Sibolangit, Deli Serdang District. The monkey was previously tied with a chain for three years under a tree in the yard of a resident in the village of Tandam Hilir II, Hamparan Perak, Deli Serdang. After a persuasive approach, the team from BBKSDA managed to get this monkey. The monkey was then taken to a treatment facility and a few weeks later released back into the wild. Previously, PTAR had been involved in caring for a leopard cub, driving a white fluffy monkey back into the forest to avoid conflict with humans, caring for and releasing slow lorises (Nycticebus Coucang), long-tailed macaques and pangolins back into the wild. PTAR also supports patrols with the BBKSDA team to find and remove traps set by residents to catch deer or other animals. These traps have the potential to kill wildlife and rare animals other than deer.
Most recently, PTAR has been involved in the care and release of ‘Sri Nabila’, a female Sumatran tiger caught in a trap by the BBKSDA team in Tapus Sipabagu village, Aek Bilah, South Tapanuli. ‘Sri Nabila’, was then evacuated and treated at Barumun Nagari Wildlife Sanctuary, Padang Lawas Utara District. PTAR pays special attention to this case because the Sumatran tiger is included in the critically endangered species classification in the red list of threatened species released by the World Conservation Organization (International Union for Conservation of Nature-IUCN).

The Sumatran tiger is an apex predator that plays an important role in controlling the population of prey animals such as deer, wild goats, wild boars and other animals. In addition, the Sumatran tiger is the only tiger species that is still owned by Indonesia. Two of them have been declared extinct, namely the Javan Tiger and the Bali Tiger.
According to IUCN data, in Indonesia, 25% of mammals, 41% of amphibians, and 13% of birds are threatened with extinction. It is estimated that there are only 400-500 Sumatran Tigers left throughout Sumatra and 250 more in zoos around the world. Once a species is extinct, there is no turning back, time cannot be turned back. For PTAR, the sustainability of one species ensures the sustainability of the entire ecosystem. A good ecosystem provides a good environment because the ecosystem produces good air, water and soil as well. In 1985, an American biologist, Prof. EO Wilson said, “This is the only living world we may ever know, let’s join forces to make the most of it.” EO Wilson’s statement 36 years ago sounds more urgent than ever before. The call to conserve nature must be answered together by the government, all stakeholders, the community and the private sector as soon as possible.
PTAR manages the mine responsibly in the community, side by side with rice fields and plantations which are also very dependent on river flows that get water from the Batangtoru Forest. The preservation of biodiversity in Batangtoru ensures a good supply of oxygen, air, water and soil that is enjoyed by hundreds of thousands of people in three districts. The Batangtoru forest is the lungs and heart of life in this area. *** 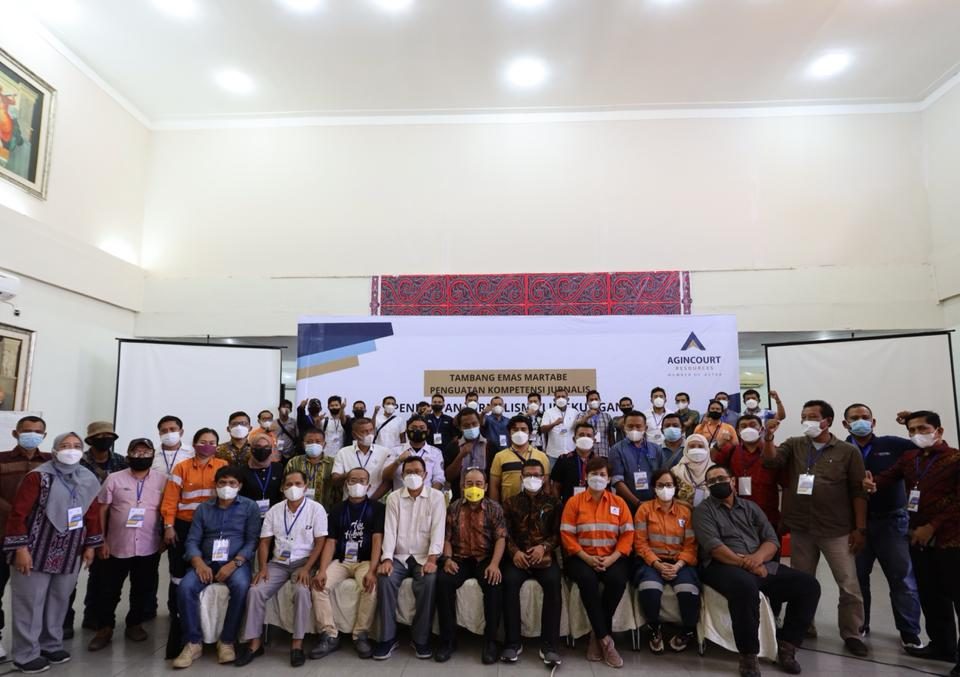